What Is This White Fuzz on Tree Branches? (And How to Treat)

In winter, you can’t help but smile as you watch those first fluffy snowdrops tumble from the sky. The world seems to stop as you’re filled with awe. That’s why we love bringing that magic inside as we decorate with white, fuzzy fake snow along our mantles. All the beauty without any of the mess!

But if you see something similar outside on your evergreens, those cottony puffs mean trouble. That white fuzz on your tree or shrub branches is a pest, not a white fungus. Hemlock woolly adelgid to be exact.

Learn more facts about the hemlock woolly adelgid, including its life cycle and the damage it can do. Plus, as always, we’re here to help you get rid of that pesky tree pest!

Are you sure that white fuzz on tree or shrub branches is hemlock woolly adelgid?

As its name implies, this specific fuzz only lives on hemlock trees, including eastern hemlocks, Carolina hemlocks, mountain hemlocks and western hemlocks. So, if you don’t have a hemlock, your tree doesn’t have this specific pest. Also, this insect is much more prevalent on the East Coast than the West Coast.

But there are a couple of other pests the look might the hemlock wooly adelgid. The cottony maple scale, for instance, but this insect most commonly attacks maples. Aphids can also look white and fuzzy. If aphids are your problem, also look for a black sooty mold. 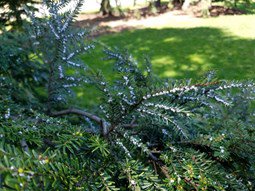 When will you see this white fuzz? What’s the life cycle of hemlock woolly adelgid?

You’ll probably see what looks like snow or small cotton balls on your hemlock tree late fall to early summer. But this pest has been around much longer than that!

This tricky pest itself is black but hides under a white waxy cover. It typically lays eggs from late winter through early summer, and those eggs hatch shortly thereafter. The pests keep growing, and when it’s cooler, they’ll eat your tree or shrub’s sap and overwinter on your plant. Come late winter, they’ll begin laying eggs again–unless you stop ‘em.

What damage does hemlock woolly adelgid do to trees and shrubs?

In the beginning, your plant will struggle a bit. You’ll see discolored evergreen needles that may drop early coupled with a lack of growth. If left untreated, the pest will continue to do more and more damage to your tree or shrub. Ultimately, your plant could die without your help.

How can I control hemlock woolly adelgid? I want this white fuzz on my tree branches gone!

Start by applying horticultural oil in late winter or early spring when it’s warmer than 40° but cooler than 70°. This oil kills overwintering insects on your plant. Have your arborist follow up and inject an insecticide into the soil throughout the season to help protect your tree.

How long should I wait between treating hemlock trees?

Your arborist may recommend applying dormant oil once each season in spring and late fall. As far as the soil injection goes, your arborist will typically apply once or twice a year.

Ready to wipe out this pest and save your plant? Click here for a free consultation!

What to Do About Mushrooms Growing at the Base of Trees

Have you noticed mushrooms growing around your tree's base or roots? It may be dangerous. Learn how to identify and manage honey fungus on your tree.
Read More

“Ganoderma root rot” is a fungus that causes a wood-decaying infection that occurs through tree wounds, and attacks a variety of deciduous trees, such as maples, oaks, and honey locusts, as well as ashes, elms, and some conifers as well as palms. Here are symptoms and signs.
Read More
Back to our Blog