Bagworms: Are They Harmful and How Can I Get Rid of Them?

Seeing a butterfly emerge from its cocoon is magical. As it spreads its wings, you look in awe at the array of fluttering colors before you!

But, that sense of wonder doesn’t translate when a black, fuzzy moth emerges from its bag! Those moths, likely bagworms, were busy eating your evergreen or tree before making their debut.

A Davey Blog reader Jodie H. saw them on her tree and asked, “My mimosa tree has bagworms. How do I get rid of them?”

Learn what bagworms look like, the damage they do to your trees and how you can control them below.

You probably won’t see the bagworms themselves, but instead, the 2” homes bagworms make in your trees. In the fall, the insects use their silk and pieces of the tree to create a camouflaged, cocoon-looking bag, which they fill with up to 1,000 eggs!

The eggs hatch in late spring or early summer, when super tiny, black larvae emerge. At 2 mm, they’re barely larger than a pinhead, which makes them light as a feather. The caterpillars use their silk thread as a parachute to travel to nearby trees and begin building a new home (or bag) there. 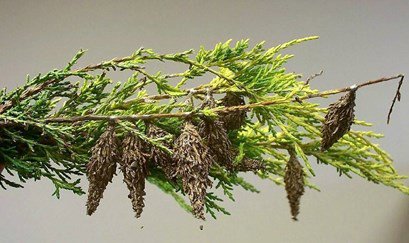 The pests hang out in their bags until late summer or early fall when the adult males emerge to mate. About the size of a quarter, male bagworms are ashy-black moths with transparent wings.

Where do bagworms come from?

They’re actually native to North America. But they’re mainly in the Eastern United States, dispersed all along the East Coast and in much of the Southeast.

What damage do bagworms do?

Bagworms will attack more than 120 different types of trees. Though, they prefer evergreens, like juniper, arborvitae, cedar and spruce.

On evergreens, they’ll eat lots of the buds and foliage, causing branch tips to turn brown and then die. But if they eat more than 80 percent of the tree, the entire evergreen may die.

On deciduous trees (those that lose their leaves in winter), bagworms chew small holes in the leaves and can cause defoliation. Generally, these trees will bounce back if you get rid of the bagworms.

Bagworms also wrap silk around the twigs they build their bags on, which could kill the tree twigs a few years from now.

How can I get rid of bagworms on arborvitae, evergreens and other trees?

You aren’t going to like this, but the easiest way to remove bagworms is to cut off the bags by hand and destroy them. Be sure to cut off all their silk, too, because that could strangle (and kill) twigs later.

If that’s too gross or there are too many bagworms for you to remove, we can help! A certified arborist can apply a treatment to the tree when the larvae are active in late spring or early summer until they are no longer visible and feeding.  This varies by region, so contact your local arborist to determine the correct timing for your location.

Bagworms: Are They Harmful and How Can I Get Rid of Them?

Learn everything there is to know about Bagworms. What they look like, what type of damage they do and how you can get rid of them.
Read More
Back to our Blog