What Trees Do Bark Beetles Attack and Can I Get Rid of Them?

Feel like you’ve heard more about bark beetles than ever? Well, you’d be right!

There are more than 600 species of bark beetles throughout the U.S. And since the bark beetle outbreak began back in 1996, these beetles have affected more than 41.7 million acres of land in the U.S. That’s about the size of the entire state of Florida!

Read on to find out why there are more bark beetle infestations now than ever before. You’ll also learn how to identify which bark beetle may be in your backyard and how to deal with bark beetles!

Because the temperatures are historically higher, bark beetles are surviving winters. Plus, the heat coupled with the lack of rain have severely stressed trees.

In short, more beetles are surviving and going after stressed trees!

What trees do bark beetles attack? 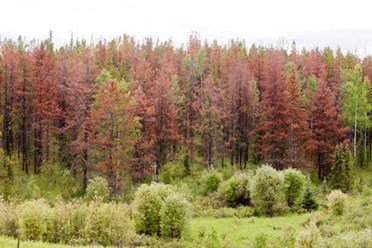 Because there are SO many different types of bark beetles, it seems there’s a bark beetle out there for nearly every tree type.

But, primarily, bark beetles attack cedar, fir, pine and spruce trees. There are some beetles out there that go after arborvitae, cypress, elm, fruit, larch and redwood trees.

Most bark beetles prefer stressed, weakened trees. So, keep your tree properly mulched, watered, pruned and fertilized to lessen the chances of a bark beetle infestation.

What do bark beetles eat?

Once bark beetles have tunneled under the tree’s bark, they begin chewing on the growing part of the trunk, called the cambium layer. It’s this layer that produces new cells that allow the trunk, branches and roots to increase in diameter each year.

What kind of damage do bark beetles do? 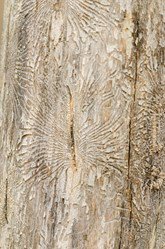 Because bark beetles generally go after weak trees, the trees don’t have much energy to fight off an infestation. Once there, bark beetles cut of the tree’s ability to transport water and nutrients.

As a result, the trees’ needles or leaves will slowly change color. You may also see small holes, sawdust or brick-colored tubes on the trees’ trunk or branches.

Bark beetles have affected more forests and trees along the West Coast. Specifically, California, Colorado and even Wyoming have been hit the hardest.

Since 2010, an estimated 129 million trees have died just in California’s national forests because of the drought or bark beetles. That means 30 trees have been dying, on average, every minute!

To break that down further, in 2017, 27 million trees died. That was down from 62 million trees in 2016. Click here to see how many trees bark beetles are estimated to kill in California in 2018.

Bark beetles are not stopping there. The insects have traveled east and are causing troubles in the Northeast and Southeast now, too.

Can you help me with the identification of the bark beetle I have?

Each type of bark beetle typically only goes after a few tree species. So, the easiest way to see what kind of bark beetle is attacking your tree is to figure out what type of tree you have.

Then, if warranted, you may want to treat for bark beetles proactively to prevent beetle attacks.

Bark beetle treatments can be applied annually. You have to decide if you want to fight these pests over and over again. Or if you want to get rid of the tree and start over.

In regular conditions, healthy trees can withstand some beetle damage. But because of the drought, they just can’t fight it off. If you start seeing the tree brown, it’s most likely a goner.

As mentioned above, once you spot symptoms of bark beetles, it’s usually too late to save the tree.
By that point, you likely need to remove your tree to avoid it falling on its own and doing damage. Or if you’re lucky, you may be able to remove the dead branches and improve your tree’s health.

Suspect your tree has bark beetles? Or want to treat it before it gets them? Click for help.

Round Up: Common Native Tree Pests & Diseases in the South

Here are signs and symptoms of common tree diseases and tree pests typically found in the south. They aren’t always easy to spot, but recognizing these classic visual cues can be a warning sign of an infested, sick tree.
Read More

Is it a bug? A bird? Who is marking up your tree's trunk? Well, it's probably a borer or a bird. Keep reading to pinpoint who's the culprit and what you can do!
Read More
Back to our Blog