Shaggy, smooth, papery–tree bark comes in all sorts of textures and shades. But no matter its appearance, that bark’s not just there for looks!

A tree’s outermost layer of bark protects it from outside stressors, like extreme temperatures, insects or pecking birds. So, when intruders break through the bark, it can be bad news for the tree.

Michelle, a Davey blog reader from New Jersey, saw this first-hand on her evergreens. She wrote, “The spruces in my front yard are becoming see-through with a lot of dead, bare branches. They have little holes in the main trunk, and the sap has dripped out. What is wrong with them?”

Read on to find out the top reasons why there are holes in your tree’s bark, like Michelle’s tree.

Do tree insects cause holes in tree trunks?

Certain pests, called borers, tunnel their way in, out, and around tree bark–and even the wood under bark! All that movement may leave behind teeny, tiny holes.

But they’re not the only culprits! Birds can do it, too.

So, who’s decorating your tree with their distinctive mark? The size and distribution of the holes will help you narrow it down. 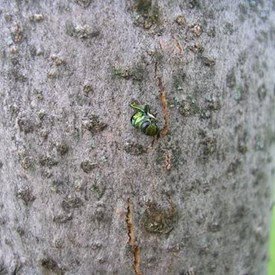 What causes rows of holes in tree trunks? 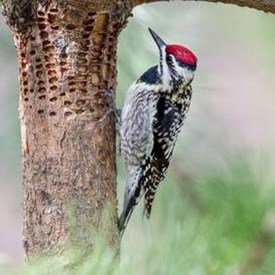 Is there any way to repair sapsucker holes?

Unfortunately, there’s no way to patch up woodpecker damage. You can deter them, though, by wrapping the affected areas in burlap or small gap chicken wire.

That way, pecking birds can’t get to bark. Be sure to remove the covering after the sapsuckers’ migration is over in the spring and again in the fall. Also, these birds are protected under the Migratory Bird Act, so do not attempt to harm, capture or kill these birds.

Have your local arborist pinpoint the problem in person (for free)!

What Disease is Killing My Maple Tree?

Here are common signs of an unhealthy maple and how to save a dying maple tree to help you better protect and preserve your favorite tree.
Read More

How to Protect & Repair Trees from Animals: Deer, Rabbits, Squirrels

Your trees are staples in your yard, and while you welcome wildlife, you’d hate to see them destroy these strong, sturdy plants in your yard. Here is how to protect your trees from animals.
Read More
Back to our Blog