Do you have a few trees with some twigs or small branches that seem to be dying? Maybe your favorite trees are slow to leaf out or are rapidly wilting in spring.

This could be a sign of insect damage. One particularly troubling pest we’re seeing more of lately is the black twig borer. Though this pest species is from Southeast Asia, it found its way to Florida in the 1940s and has been spreading to neighboring states ever since.

And this small pest has quite a big appetite.

Let’s learn a little bit more about this species of ambrosia beetle and how you can keep it from munching on your favorite trees. 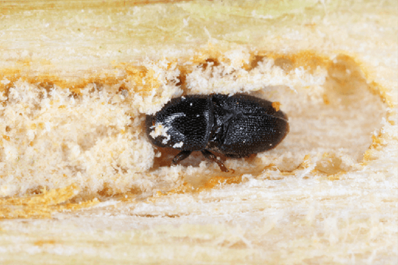 The black twig borer is a small insect -- about 1/16 of an inch long -- with a shiny black coat that kind of resembles a straight cup of coffee.

Though it makes sense, that’s not why it’s referred to as black coffee borer or black coffee twig borer. While the pest attacks more than 200 tree species in the U.S., in other countries it’s a serious pest of the coffee plant. That’s where it really gets its nickname.

This pest is in Florida, Georgia, and has been found in other Southeast states along the Coastal Plain from Texas to North Carolina, as well as Hawaii.

The adults overwinter in infested tree branches and twigs. Then, the females (which are the blacker ones) emerge in early spring when the dogwoods bloom, which is one of their target tree species, in addition to magnolias and many others.

Females leave the host tree where they developed and infest new branches and lay eggs. It takes only one month for those eggs to mature into more adult beetles. The process repeats itself throughout the growing season.

How to Identify Black Twig Borer 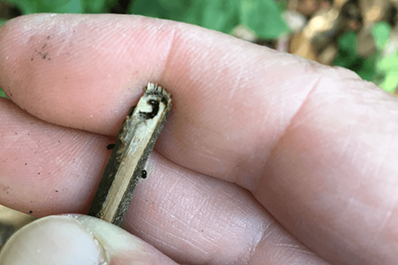 You may not see the shiny black twig borer itself since it’s so small. In fact, it’s a little bigger than the tip of a sharp pencil.

But you might find their entrance holes on small branches. While many other borers tend to attack trees that are already stressed or injured, this pest doesn’t discriminate between weak or healthy trees; it loves them both.

Trees that have been heavily or overly pruned may also be more attractive targets of these borers.

Branch or twig and leaf wilting is usually the first sign of black twig borer damage. This insect usually focuses on ⅞-inch diameter branches or smaller and leaves behind holes that are as thin as pencil lead.

But not only do these beetles bore; they also infect your tree twigs with a fungus. As the fungus spreads, your tree leaves on the infected branch will begin to wilt and the end result is branch dieback.

Black twig borers feed on more than 200 tree species, so they aren’t very picky. Some of their most common invaders include:

There is some good news concerning black twig borer treatment. If you catch it early, pruning out impacted branches can limit the spread of beetles and save your tree.

You want to remove the branch a few inches below the symptoms of dieback. If you see dark brown staining in the center of the branch after pruning, keep cutting until you find healthy wood. Remember to dispose of those branches after removal.

How to Get Rid of Black Twig Borer

Unfortunately, once your tree is infested, these beetles cannot be controlled with pesticides, and fungicide is ineffective against the fungus they spread.

But spraying the tree with certain insecticides after the infested branches are removed may help guard against further attacks. You may want to try this strategy in areas that had infestations in years prior, especially following a mild winter.

Always remember that proper tree care, such as adequate watering and mulching, can help trees better recover from any black twig borer damage.

NOT SURE IF BLACK TWIG BORER IS A PROBLEM IN YOUR YARD? CONTACT YOUR LOCAL DAVEY ARBORIST FOR A FREE TREE INSPECTION.

Common tree borers include the Emerald Ash Borer, Locust Borer, Bronze Birch Borer, and Longhorned Beetles. Learn which types of trees are at risk, where you’ll find these tree borers, common tree symptoms, and how to get rid of the tree borer.
Read More
Back to our Blog