Shrub Identification: Do I Have a Japanese Holly?

Looking for a low-maintenance hedge that is similar to boxwood but offers a little something special? Then the Japanese holly may be the one you’re seeking.

There are a few varieties to choose from, so you have options to fit your specific garden.

Maybe you already have a Japanese holly in your yard or you’re thinking about planting another one. Here are some popular Japanese holly varieties and some care tips. 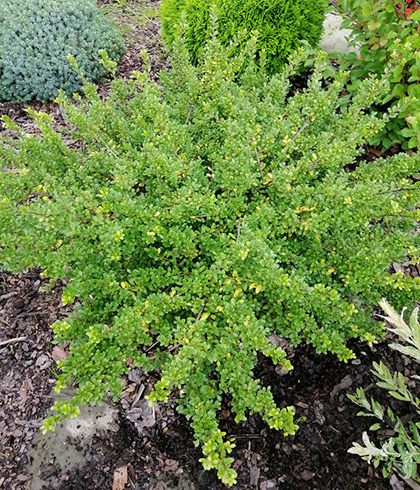 It’s slow-growing, fine textured, and comes in more than 500 cultivated varieties. Sometimes referred to as the box leaf holly because it resembles a boxwood, the Japanese holly actually has darker, more lustrous foliage than boxwood and is less prone to insects and diseases.

Japanese holly leaves are egg-shaped and arranged alternatively on the plant’s stems. When both male and female plants are present, small, round, purple-black fruits will appear.

Though it prefers sun and light, moist, acidic soil, Japanese holly is tolerant of shade, drought, and urban conditions.

The Japanese holly is a native of Japan and East Asia, usually found in woods and wetter lowlands and mountains all over Japan. Today it is one of the most popular landscape plants in the U.S.

This shrub is often used to make topiaries because it can tolerate the necessary pruning.

If you’re looking to add this special shrub to your yard, try one of these popular Japanese holly varieties:

The Japanese holly is quite easy to care for, but there are a couple of pests and diseases this wonderful hedge may encounter.

Southern red mites are Japanese holly pests that usually attack in spring and fall. They feed on the undersides of leaves. Symptoms of feeding include light yellow speckling on leaves. Eventually, the leaves will turn brown and then drop.

If you live where fall weather is cool and wet, Phytophthora Leaf and Twig Blight may infect the leaves and stems of Japanese holly. The disease is characterized by purple-black leaf spotting, defoliation, and the development of twig cankers. Leaf spotting frequently begins on the leaf margin and on the lower part of the plants in late fall. The disease progresses up the shrub during winter. Twigs dieback and cankers develop on larger stems later in winter.

A certified arborist can help you gain control of southern red mites and check for black root rot disease on your Japanese hollies.

NEED HELP IDENTIFYING WHAT TYPE OF TREE OR SHRUB YOU HAVE? CONTACT YOUR LOCAL DAVEY ARBORIST.