The stately American beech tree holds a special place for many homeowners who enjoy basking in its shade.

Its wide-spreading canopy is a great refuge on sunny days and adds amazing bronze color in fall. 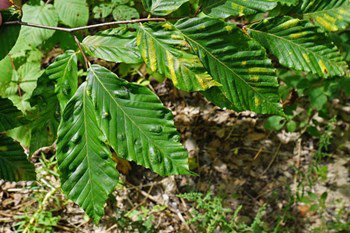 Both native and ornamental beech tree species are susceptible to beech leaf disease.

The disease is associated with a nematode worm called Litylenchus crenatae spp. mccannii that infects beech buds and leaves. But knowing if your beech tree is impacted will take looking for some classic signs of infection. Spotting these symptoms early can help make a difference in catching a problem before it becomes too detrimental to your tree’s health.

You can see symptoms of the disease mostly in leaves and can be visible from leaf out in May until the leaves fall off in October. You’re looking for:

What Else Looks Similar To Beech Leaf Disease? 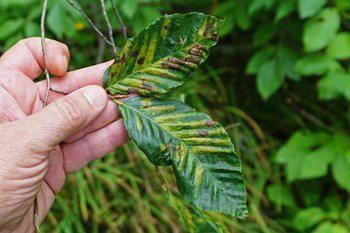 Several other tree problems can look like beech leaf tree disease, which can make it harder to identify.

Some common ones include:

Why Is Beech Leaf Disease A Concern?

Beech leaf tree disease can kill a mature tree within 6 to 10 years.

But it is most damaging to young trees, which can die in less than 5 years after the first signs of infection appear. In places where the disease is well established, it has proven fatal to 90% of saplings.

Are There Any Beech Leaf Disease Treatments?

Unfortunately, there is no proven remedy yet for beech leaf disease, however, we are actively conducting research and testing different treatments for effectiveness.
If you see signs or symptoms of the disease, reporting it to your local arborist is vital to ensure they know where it’s spreading and can help contain it.

How Can You Help Stop Beech Leaf Disease From Spreading?

When it comes to how to treat beech leaf disease, there are some things you can do.

To slow the spread of the disease, remember these tactics in addition to talking to your local arborist for some recommendations and next steps:

BEING PROACTIVE CAN HELP YOUR LANDSCAPE TREES. FOR MORE INFORMATION, CONTACT YOUR LOCAL ARBORIST TODAY.

What Disease is Killing My Maple Tree?

Here are common signs of an unhealthy maple and how to save a dying maple tree to help you better protect and preserve your favorite tree.
Read More