Palm trees are great additions to your landscape, adding curb appeal and some greenery to regions of the country that can accommodate these tropical/subtropical plants.

As prominent features in your landscape that add value as they grow healthy, the last thing you want is for your palm to suffer, looking wilted and worn out instead of green and vibrant.

Invasive palm weevils are pests that can wreak havoc on your palms.

Here’s what you should know about palm weevils, the damage they can cause, as well as treatment solutions.

What Are Palm Weevils? 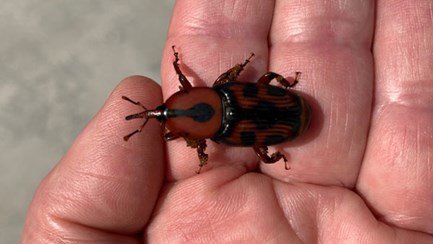 In fact, some species are considered the most damaging insect pests of palms in the world.

There are 3 main weevils that tend to be an issue. One, the palmetto weevil, is native to the southeastern United States. It prefers wounded or stressed sabal palms, Bismarck palms or Canary Island date palm. However, it can also attack seemingly healthy palms. Properly fertilizing and maintaining palms may help keep this weevil at bay. 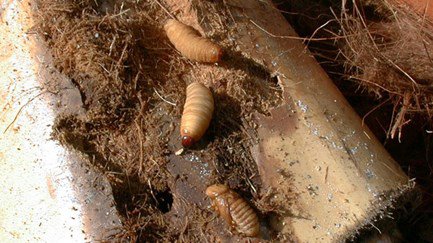 Some people say the red palm weevil is the world’s most damaging pest to palms.

Native to southeast Asia and the Pacific Islands, the red palm weevil was first detected in October 2021 in Laguna Beach, California.

The red palm weevil is reddish-brown, but since it can range from mostly red to entirely black, color alone hasn’t been a great way of identifying the pest.

Some of the plants most susceptible to red palm weevil include: 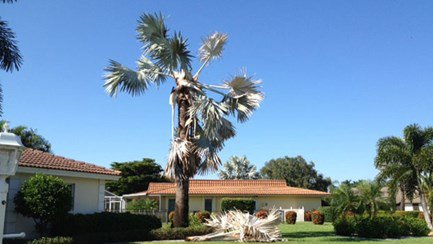 Early red palm weevil damage can be hard to spot.

Since red palm weevil larvae spend much of their lives inside the tissue of a palm, finding tunnels or frass (wood shavings) on the crown of the palm’s central growing point is usually how your local arborist will be able to detect the presence of these pests.

As the infestation progresses, symptoms become more noticeable. New leaves (fronds) won’t grow properly; instead the new growth will die back, followed by decaying leaves that droop and appear yellow and brown. You might also detect a fermented odor.

How To Manage Red Palm Weevil

How to control red palm weevil involves using systemic insecticides through trunk injections or soil applications. This method is only effective if applied preventively. Once the damage is noticed, the palm is most likely beyond salvage.

In commercial groves, mass trappings with aggregation pheromones have also been used, as well as chipping and burning infested material so the pest doesn’t continue spreading. However, neither approach is recommended for homeowners.

Unfortunately, no methods of biological control currently exist to control this pest. 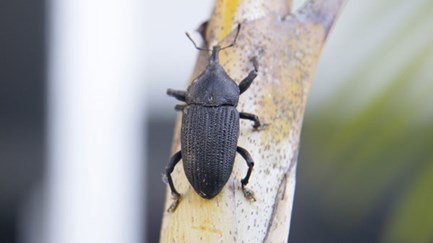 This species of snout beetle has killed hundreds of Canary Island date palms since it was first detected in March 2016 in San Diego, California.

Palms most susceptible to South American palm beetle infestation include: 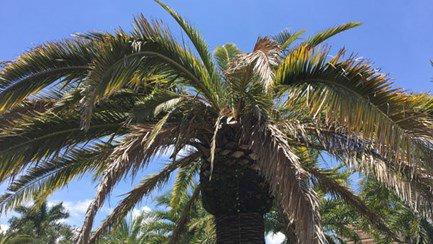 First, you might see yellowing leaves. Then, newly emerging leaves might quickly die. Leaves typically dry out from the crown down. A lot of these damage signs result from beetle larvae excavating tunnels throughout the palm’s tissue. And this can happen fast: A large population of South American palm weevils can destroy the internal tissue of a 3- to 5-year old palm tree in just 5 to 6 weeks. A large population equates to just 30 larvae.

Another problem South American palm weevil can cause is red ring disease since this pest vectors a nematode that transmits the disease.

Since these pests remain well concealed in palm tree tissues, infestations are usually only detected once the palm begins to decline. Preventive treatments with systemic insecticides may help; however curative treatments once symptoms are noticed are not effective.

THINK RED PALM WEEVIL OR SOUTH AMERICAN PALM WEEVIL COULD BE PROBLEMS IN YOUR YARD? CONTACT YOUR LOCAL DAVEY ARBORIST FOR A FREE TREE INSPECTION.

Palm Tree Care: Should I Cut Off Brown Palm Leaves?

Giving your palm trees proper care includes understanding why their leaves may turn brown and how to best care for them. Here's what causes palm tree leaves to turn brown and what you can do about it.
Read More

Palm weevils are invasive beetle species that pose a fairly serious threat to palm trees. Here’s what you should know about palm weevils, the damage they can cause, as well as treatment solutions.
Read More
Back to our Blog