How the Polar Freeze Could Affect Your Trees

Record-low temperatures came with a vengeance early this week, shocking cities all over Canada and the U.S., including even the southernmost states. Heavy coats and warm, winter gear made frequent appearances as countless school districts closed in advance, families stocked up on groceries and vehicles struggled to start.

While some cities-even those located in the center of the cold spell-never reached the depth of subzero frigidity previously recorded this century, others did achieve record lows, dropping below temperatures they experienced 20 years ago and beyond. According to The Weather Channel, more than 50 primary weather observation sites, most of which located in major cities, recorded the lowest temperatures to date on Jan. 7.

You may have warmed up some now that the polar freeze has thawed a bit, but what about your trees?

There are a few things to watch for: 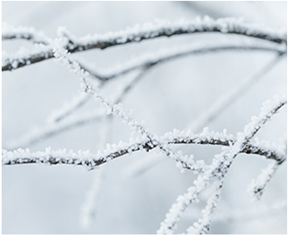 THE GOOD NEWS ABOUT THE POLAR FREEZE

According to Davey's R.J. Laverne, there is good news. A frost in late spring or early summer is actually much more stressful than a period of extreme freezing temperatures during the dormant season.

"Trees are already dormant so the polar freeze will have little long-term effect," says Laverne, an ISA board-certified master arborist, adding not much can be done now to protect trees, but good fall care can help trees withstand winter's harshest conditions. "All the prep work, such as mulching and good watering, needed to be done in the fall, so as long as homeowners did that, their trees should suffer little damage from these frigid temperatures."

Also, just like with people, fall conditions prepare trees for winter. They provide a gradual descent into cooler temperatures, as well as growing storage of water. It's only when the warmer weather hits, that trees reduce their cold tolerance.

Which trees withstand cold temperatures better than others? Laverne says trees and shrubs native to the region in which they are growing will usually fare better than those that have migrated from other regions, particularly the South.

Although snow is associated with frigid temperatures, the fluffy white snowflakes that often blanket your backyard this time of year actually help ensure the survival of your trees and plants through spring.

Snow cover provides natural insulation that can protect root systems. In most winters, soil insulates root systems well by itself. But a large snow accumulation can greatly benefit your trees during a polar freeze.

Why You Should Start Looking For Winter Tree Damage

Spring is a great time to inspect your trees for both obvious and not-so-obvious problems.
Read More

How To Help Trees Recover From Winter Dieback

Don’t panic! Winter tree dieback does not mean your tree is a goner. Learn how to recover your trees from these common winter damages: sunscald, winter desiccation, soil damage from salt, and snow and ice damage.
Read More
Back to our Blog