Do I Have A White Pine?

Sure, the western parts of the U.S. may have taller trees (think redwoods), but the eastern white pine tree is the largest conifer native to Eastern North America.

This fast-growing, long-lived, needled evergreen is also the state tree of both Michigan and Maine.

Think you have one of these beloved pines in your yard? Keep reading our eastern white pine tree facts to learn how to identify and care for them.

How To Identify A White Pine

Eastern white pines have been widely used in the home landscape for their year-round green color, as well as providing much-needed windbreaks and summer shade.

People love this fast-growing evergreen because of its long, soft needles and ability to grow up to 80 feet tall and 40 feet wide, which add an impressive structure to the landscape.

Identifying an eastern white pine starts with looking at its needles, which have a long, soft, velvety, blue-green appearance. Unlike their shorter-leaved evergreen counterparts, these needles will wave in the breeze, adding some extra dimension and texture to your yard.

The eastern white pine is the only pine tree in the East that has five needles per bundle, also termed as fascicle. These bundles form clusters that look like small brushes. Needles range in length from 2 to 6 inches long.

Is eastern white pine edible? Yes, pine needles can be dried and ground into smaller bits for tea. They can also be ground to use in cooking or baking. But these uses are typically for survival situations only. 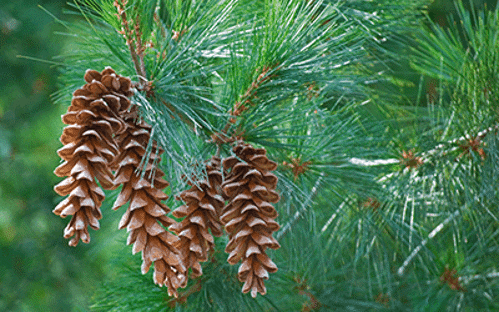 Another way to master eastern white pine identification is by looking at its cones.

The eastern white pine cone is cylindrical in nature, and the tree’s seeds are in the cones.

Male pine cones are small, yellow, and clustered at the base of the current year’s growth, whereas female pine cones hang downward from branches at a whopping 3 to 8 inches long. These female pine cones mature in two to three years and drop after shedding seeds. A white pine is typically 20 to 30 years old before it reproduces. 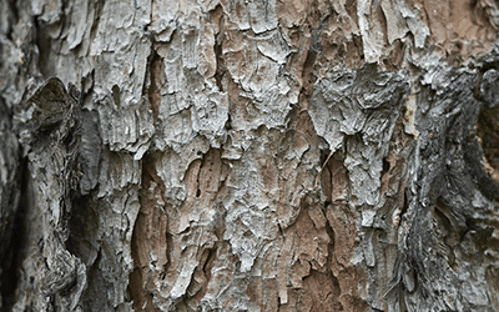 Eastern white pine trunks are tall and straight. They can grow to a diameter of up to 3 feet. Its branches are irregular in shape and grow in a whorled arrangement around the trunk. In fact, the age of these trees can be estimated fairly accurately by counting the number of branch whorls.

How To Care For Eastern White Pine

Most white pines don’t perform well in soils that are too wet. In addition to dry soils, they prefer more acidic soils, so a thick bed of pine needle mulch over the root zone will both cool the soil and lower its pH. One inch of water weekly keeps these trees happy.

Eastern white pines are susceptible to some pests and diseases. Rust and root rot can impact the tree’s appearance and health. Bigger problems include white pine weevils and white pine blister rust. Mitigate these potential threats with an appropriate plant health care program.

STILL NOT SURE WHAT TYPE OF TREE YOU HAVE? CONTACT YOUR LOCAL ARBORIST FOR A FREE TREE INSPECTION!

What Plant Hardiness Zone Am I In?

Here's how to read planting zones and how to use plant hardiness zones, so you can get the best plants for your yard.
Read More

Where do Azaleas grow best? Do Azaleas come back every year? Get all your answers here and learn best practices on how to care for azaleas.
Read More
Back to our Blog